You are a hardy tea picker of the small folks tasked with an impossible task: ending a menace of sorrowful giants roaming the land and ruining your tea tress. Play solo or co-op in this hex-crawling adventure to find out what happens - and remember to keep the tea brewing!

After the arrival of man, you – the smalls folks of the Tea Tree Vales – sought refuge in the most unlikely of places: the northern heights of the primeval forest of Adam. Here the trees grow tall as mountains, their trunks wide as lakes. This is a giant forest – literally.

During the day, your community do their chores. Foraging, tending your dispersed tea tree plantations and keeping the small huts sealed tight for the freezing forest nights.

By evening twilight, however, colossal beings roam the land under the grey moon: giants, sobbing giants, sorrowful, if not frightened. Their cries and moans disturb your sleep, and their aimless wanderings and strange behaviour threaten your tea trees and thereby your very existence.

Now, enough is enough. The village elder has called you – a hardy and slightly addicted tea picker with a trusty sling and hand weapon at your side – to see an end to the menace of the twilight giants. Why do they wander? Why their cries? Stop it, save your village – save your tea.

While the core mechanic of this game is Powered by the Apocalypse, the approach to combat is loosely inspired by the ideas of the Free Kriegsspiel Revolution (FKR), particularly games as Skorne and Any Planet is Earth. Finally, the vivid art of @perplexingruins need mentioned. The story essentially emerged from there!

This game was created for the mini ttrpg jam and the RPG-Talk Tabletop Tea Jam.

Art used with permission from @perplexingruins. 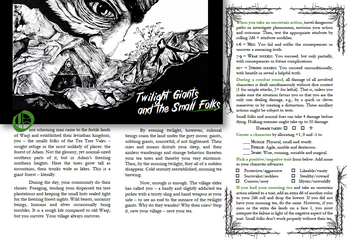 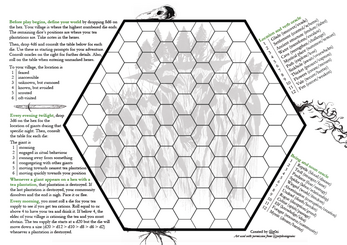