Play as an individual engineered to save the advanced island state of Timekeep from the grey moon. Bring back light and dark - or don't. This is a lo-fi sci-fi solo roleplaying game and scenario in three acts with light mechanics,  a dark story and grey zones.

The year is 3411. At least if you keep count by the passing of day and night. In Timekeep – the small island state to the east – they keep time. For thousands of years, they kept time for the entire kingdom of Waqt. But then, time came to an end at the mainland. Sun and moon both set, never to rise again. Day and night, light and dark disappeared, replaced by the unending grey and its grim moon. Old Waqt descended into chaos.

Timekeep, however, was spared. There – only a few kilometers of the coast – sun and moon rose and set as always. Day and night, light and dark prevailed. Time reigned. Realizing their blessing, the island leadership retracted the magnificent suspension bridge and cut ties to the mainland, an impenetrable mist covering the small waterway. The existing regime of meticulous time keeping hardened into a ruthless system of social engineering. Order and progress – the will to live by time – became the mantras of the Timekeep oligarchy.

You, however, have been engineered for this; for the contingency of another time collapse, of the grey menace. The Leadership demands your services, and they are certain that answers shall be found in the mainland.

This game is inspired by the mechanics of Ironsworn and the Year Zero Engine, the tables of Maze Rats, the oracles and simplicity of Ask the Stars and, of course, the evocative art of @perplexingruins. And I nearly forgot the last one: a world of mystical traditions intrigued by numbers.

Game was created for the Light and Darkness TTRPG Jam and the Lone Wolf Solo TTRPG Jam on itch.io. 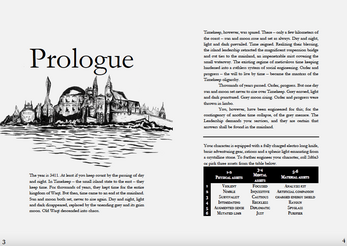 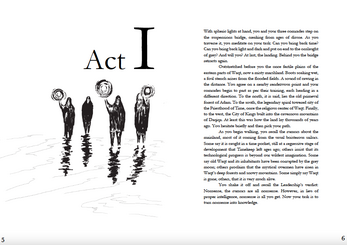 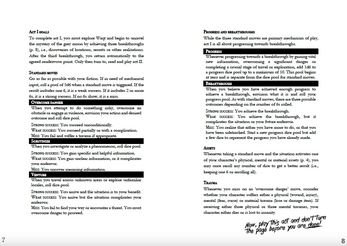